Today, we travelled to Provo approx 30 miles away. We turned into Canyon Road and passing Riviera Apartments 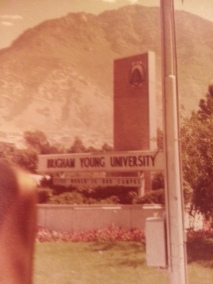 passing a few blocks and Brigham Young Campus was to our right. We entered BYU and attended Assembly as it was their first day back for a new term. After all the speeches were made we left & boarded our coaches. We were taken on a short tour of Provo passing the Provo Temple 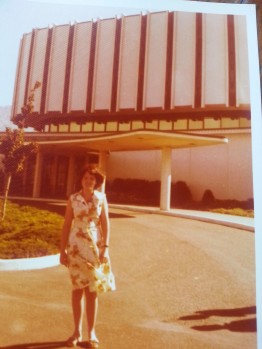 then up the hill to look at a view of the BYU Campus. It was large ! We were to have lunch on campus. Eventually we had our lunch, the waitress asked if I had any relatives in California as I looked like someone she knew ! We met back at our coaches at 230pm & then went to Bridal Veils which was lovely. It was so hot that the shop nearly run out of drinks ! The next stop was Sundance, Robert Redford’s place. 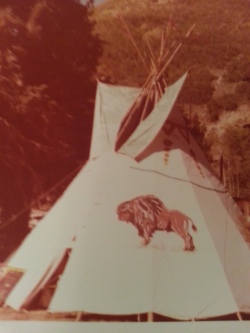 He was around somewhere but we didn’t see him ! Shame ! It was beautiful there. We then moved on to Orem, just past Provo, to see the Osmonds Fan Club. It was a “very out of the way” place, so peaceful. Mrs Osmond, Virl, Jimmy and Grandma Davis were there, they were lovely.

Presents were given to Mrs Osmond to pass onto the rest of the family. We ordered items from the Fan Club, I bought Marie’s set of ‘cleanser, rinse & masque’, the concert book and Donny’s book “Voices from the Dusk”, at long last I have it ! It was extra special as it was signed inside. We then boarded the coaches after Mrs Osmond & Grandma Davis left together. Ron, our courier, then came on the coach & told us there was a surprise back inside, it was fan club posters, cards etc. We boarded again feeling very pleased & happy. We had done well today ! The next stop was just up the road to the new Osmond Studios,

they looked so large. We had seen the plan of the Studio at the Fan Club & Ron described to us the inside & future plans, Merrill is working on the idea of having a Fun (Fair) Ground next to the Studios, calling it “The Land of Os”, sounds great. On the way home we stopped outside Riviera Apartments & right there was Donny’s car !

Cameras clicked like mad from inside the coach because we were not allowed outside ! I wonder why ! It was then back to the Holiday Inn. A great day. Goodnight everybody !